Just a quick reminder to join me live this Saturday!

30 mins LIVE to move in French!

This will change what you think about learning French!

Whether you are a total beginner or you are already at a more advanced level, this live session will boost your French. You will try a method called Total Physical Response (TPR) to help you retain the new vocabulary effortlessly.

First of all, it is NOT about learning, it is about ACQUISITION.

Language learning is about the form: the correct grammatical structures and correct pronunciation. You are studying French using a grammar textbook, flashcards and vocabulary lists. Something that babies never had when they were learning their first language!

Language acquisition is about meaning. If you’re just crazy about the French series Dix pour Cent and watch it so frequently (with subtitles) that you actually know what “ Du coup ” or ” Pas de souci ” mean, then you’re acquiring the language without obviously trying to learn it.

Language learning is conscious and formal. Language acquisition is natural and happens subconsciously.

Total Physical response or TPR provides you with a language acquisition experience. TPR is about meaning.

Total physical response was developed in the 1970s by James Asher, professor of Psychology at the San Jose State University in California.

Asher observed that while adults were dropping like flies in their second language courses, children were easily acquiring first languages like sponges! So he decided to create a method of teaching second language that mimics the process children use when picking up their first.

Children’s early language repertoire consists mainly of listening to adults telling them what to do: “Pick up the ball.” “Sit down.” “Open your mouth.” “Look at me.”

Children look at their parents for instructions, and then perform the movements required. Children are not forced to say the words, they only listen and understand. Comprehension is the first step to language acquisition, not word production. 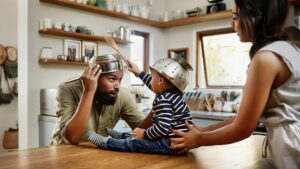 Asher adopted this simple listen and respond technique. It’s proven effective for learners of foreign languages because there’s something about the pairing of movement and language that’s so innate that you easily acquire language. #inputaloneissufficient

What will you gain from those 30 minutes in French?

• Have fun! While your mouth is open from laughing, your mind is subconsciously open for acquiring French.
• Remember each action forever. The act of moving is memory-friendly. You easily associate the words with their meanings.
• Acquire French through observation and actions. Both hemispheres of your brain are working.
• Listen and thoroughly internalize the French language.

This live session will focus on actions at home: go to the fridge, open, close, take, eat, watch…

Everybody is welcome, it is free to join. Click here.
Gain New Friends and Get Involved with the French Learners Community. #youarenotalone
Increase your vocabulary and comprehension #trustheprocess
Reduce your stress #relax

Merci beaucoup. This is by far the best and most useful language course I’ve ever seen and tried.

What are you waiting for? Join us now and make real progress in French for as little as 5 Euros/month!

P.P.S Come and connect with other members in the community during the Saturday live Community Session! It is an opportunity to share your journey acquiring French as these calls are driven by the members themselves. Karel, Diane, Tina, Paula, Lauren, Graham will welcome you warmly! #youarenotalone