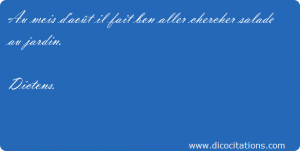 In the month of August, it does good to go look for a lettuce in the garden.

I had such a wonderful in Agen! Being a Latin learner in the morning with amazing Justin Soclum Bailey was an eye-opening experience. As a learner, I felt the need for repetition, clarity of speech and also interesting, compelling input. When Magister Justin told the class the true story of this Roman poetess, all in Latin, I was in awe! I could understand the story with ease and I was not thinking about the language nor about the fact, it was in Latin! C’était magique ! It was like Magic! 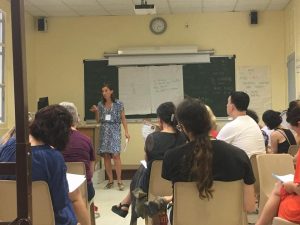 I also learned a lot from all the presentations I attended (despite la canicule, the heat wave!). One which really got me thinking was about Very Narrow Listening by Judith Dubois (who also happens to run the conference).

I think that is how I would translate Narrow Listening in French but I am not too sure?!

Listening is KEY to acquire another language. That is why I really liked Judith’s presentation (read Judith’s detailed blog post about how she uses Very Narrow Listening with her English learners). The focus was on how to train learners’ ears to listen and understand the message. 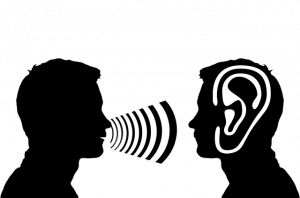 The idea of Narrow Listening is to get used to listen to native people speaking at normal speed. One of the biggest struggle language learners have.

Alina Kuimova, Founder and CEO of LinguaPath wrote an informative post on How to fix your “I don’t understand natives” problem.

In her post, Alina Kuimova explains that Dr Krashen invented this particular technique when he was travelling to Mexico. She says: “After a number of uncontrolled conversations with Mexicans, Krashen realized that he needed to change his approach. Instead of letting natives expand on topics he knew little about, he began questioning them about something very specific and well-known to him: the story of Hernando Cortes. He already read this story in English. This background knowledge helped him to keep on track with what they were saying even if he failed to understand certain words.”

She continues: “After this experience, Krashen developed the narrow listening technique further, to the extent where he would actually record several natives speakers talking about the same topic for 2-3 minutes. Later then, he would repeatedly listen to these recordings until he felt confident enough to move on to the next topic.”

How to apply Narrow Listening to your French acquisition?

If you are a French teacher (or not!), read about I would apply it in my lessons. You will also get the chance to download two free readings and listening podcasts, otherwise available on the membership area.

When you become a member,  you get access to stories about a similar topic and/or from different points of views.

Each week, Les suggestions de la semaine encourage you to read and listen to one story a day and a bonus reading/audio for the weekend. As the week goes by, the language in the text becomes more advanced. You also have access to the audio playlist so you can listen to comprehensible French from anywhere!

This week’s stories are nearly all about pets, and all of them start by describing the charcater(s) in the story. So the vocabulary is specific and you get to listen to the same vocabulary several times in different ways. That way you don’t get bored!

Today’s story is about the perfect woman who happens to be Parisian ( C’est clair ! ). Read it here and listen to it here (or here if you can’t see it appearing):

AND I am super excited to announce there is a dyslexic mode & font available now to read the stories on the site! How good is that? For as little as 4.75EUR/month, YOUPI !

Qu’est-ce que tu attends ? What are you waiting for ?

Take your French to the next level.

Be part of the French learners community.

You also have access to all my videos FOR FREE! To apply Narrow Listening, have a look at my playlists and select one which interests you.

Alina Kuimova gives step by step instructions on how to use Narrow Listening on YouTube.

If you like to bake OR if you like food, you will ENJOY my new video about la tarte au citron rustique.

I can’t believe it is already the 14th video about Portugal! I plan to add more to this playlist until the end of the month. And in September, I will launch a new series for beginners about Marie et Médor. Stay tuned!

Olesya recently commented on one of my videos: “This is my third story, I am making a huge progress but I didn’t realize my 3 year old is picking up on it, too! I was trying to pronounce words and he came up to me and said: Did you say Je suis un beau garson? That was funny. I don’t think he knows what un beau garson is but the timing was absolutely perfect :-)))”

Keep commenting! I love hearing from you <3

P.P.S. The eBook (pdf) about the adventures of Marie et Médor avant Noël is on its way! 24 scripts in the present and in the past tense to be dowloaded SOON!