I am back from #Agen2019 where I had an amazing time acquiring Latin with Justin Soclum Bailey. 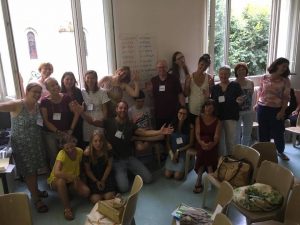 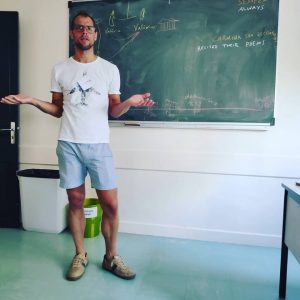 The Latin class was in the morning and in the afternoon, I attended several excellent presentations. I got so inspired that I want to share my takeaways from Agen in a series of blog posts aimed at French teachers. I also want to share ready-made resources which you can straight away use with your learners.

So let’s start with my first takeaway!

Judith Dubois (who also happens to run the conference) presented about Very Narrow Listening and this how I would implement it with my own learners. 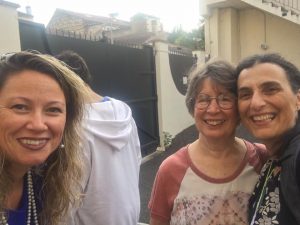 Judith Dubois with Karen Rowan (on the left) and French teacher Sabrina Sebban-Janczak (on the right) in Agen 2019.

What is Very Narrow Listening?

You can read Judith’s detailed blog post about how she uses Very Narrow Listening with her English learners. In fact, the term Narrow Listening comes from Dr Stephen Krashen who describes it as “acquirers collecting several brief tape-recordings of proficient speakers discussing a topic selected by the acquirer. Acquirers then listen to the tape as many times as they like, at their leisure. Repeated listening, interest in the topic, and familiar context help make the input comprehensible. Topics are gradually changed, which allows the acquirer to expand his or her competence comfortably.”

Judith Dubois adapted it to Very Narrow Listening. She shows the scene of a film with no subtitles, and she discusses with her class what is happening, what the characters are saying. Then, she gives the class the script with blanks and the students listen again BUT they do not fill in the blanks yet! The blanks are words which the students are familiar with. They are EASY to understand and fill in (they are not tricky words). The point is to motivate students to listen repeatedly to the same recording (not to discourage them!). Judith will then ask students to put their pens down and they will listen again. Judith stops the film after the first speech or the first part of a speech, and she asks them if they grasped the words in the blanks.

Judith says: “I believe that the blanks and missing words are merely distracters. While the students are focused on understanding one word (that is already familiar to them) they are repeatedly hearing all the rest of the conversation, a conversation spoken at normal speed and which is comprehensible, because meaning has been established.”

How to implement it with French beginner learners?

Of course, bien sûr, as a French (and Spanish) teacher, I can do exactly the same with scenes from French films or videos. This works well with intermediate learners but what about beginners? After Judith’s presentation, I thought about using all the recorded stories I have on the membership (to find out more about it, watch my recent video on YouTube).

I agree 100% with Judith: LISTENING is the most important skill. We should teach our students TO LISTEN from the very beginning. We can still apply Very Narrow Listening at an early stage, when learners are still beginners by using stories instead of films or videos.

On the membership, There are many stories which are easy to understand with many repetitions. These are perfect to start with. There is one particular story about a man called Luke who loves black coffee. When you start the year or a lesson asking what you learners like to drink, you can then have them listen to this story. The pace is slow but the voice and pronunciation are different from you, the teacher so learners get used from the start to different ways of speaking French.

Here is how I would do it:

In total, your acquirers will have listened six times to French input. Not only they will have received comprehensible input, they will also have trained their listening skill AND you, as a teacher, will have a little break from telling a story 🙂

What do you think? Have you used Narrow Listening before?

P.S. To have access to many more French stories (like the ones above), biographies, poems and articles as well as the audio files for as little as 4.75EUR/month, join now!

Read about Agen Takeway #2: Get to know your learners