The weather is getting much colder where I live and I feel like staying at home, doing yoga and listening to stories! 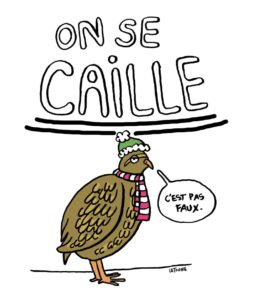 It is freezing, it’s not wrong. (It is a play on word because une caille also means a quail.  On se caille is a very familiar expression).

I actually decided not to give up on German! I have been lucky to meet an amazing German teacher, Kathrin Schechtman who tells me German stories every week. In exchange, I tell her Spanish stories.

It is so interesting to be in the place of the learner. I am acquiring a lot of German subconsciously and I am learning a lot as a language teacher. I have now listened to 4 different stories. Being able to understand them with ease has given me a lot of confidence.

The other day, I had to make a phone call in German and in the past I would have avoided it at all costs! This time, I felt confident to call and to explain myself in German. When I didn’t know a word, I had the confidence to try to explain it using other words I knew. At some point in the conversation, the words were flowing without me having to think about what I wanted to say. I don’t know if what I said was accurate or not, but the person on the other hand of the line understood me and I got what I wanted!

It was a mini achievement for me but I felt great.

Two weeks ago, I also met another amazing Russian teacher called Tanya from Belarus. I met her online because she got intrigued by the Story Listening approach.

Tanya started to watch at least one story a day pour acquérir le Franςais naturellement ! She then shared her impressions about listening to French stories each day:

“I remember my first impressions very well. The thought of “yes, I’ve got it!!!” giving you a feeling of being able to fly!

I have studied French for a while: using Duolingo,  Michel Thomas and Pimsleur audio podcasts, reading non adapted books by Ilya Frank method, enjoying Joe Dassin songs and even having some French classes in library clubs (without a native speaker). All of these resources were quite helpful, but they didn’t help much with the aural perception, which I think is the most challenging skill for all learners. Your way of teaching really involves students in a story “deeply but effortlessly”.

Certainly, the degree of language acquisition depends on your initial level, whether you know other foreign languages, on the time you spend on it, eventually on your own willingness. And still I must say the method itself means very much! And there is one more important note. The person (the storyteller) is also very important – not only his or her experience, but also the manner in which s/he tells the story!

First of all we follow the plot of the story, empathizing with the characters, sometimes thinking afterwards over the whole day about their behavior, actions or about the end of the story. Then, day after day, your hear the same words at the beginning and at the end of each story, and you notice that phrase, for instance “mets-le dans les commentaires”. Unintentionally it continues to “sound” in your head. Very soon you understand that it not only “sounds” but also “asks” you to repeat it! “Mets-le dans les commentaires” sounds like a song, and you pronounce it in a way the storyteller says it.

When you watch these video, the primary aim is to grasp the story, to comprehend it in general. But in the course of time (for me two weeks) you want to understand every detail of it. So you can watch the story once again with subtitles, and this is a good exercise! You listen to the same story (already knowing its background) and you follow the written script.  Thus unconsciously, little by little, you will acquire the grammar. Of course, it will not be too complicated, because the story itself is intended for foreigners with a low language level.

And finally, what I am going to do with the most touching video – I will repeat this story, word after word, trying to keep the same intonation and pronunciation of the native speaker.

These notes are good for those people who want not only entertainment with the story, but also to move ahead with the language itself. Thank you very much for the strong motivation to study French, one of the most beautiful languages of the world.”

I LOVE Tanya’s feedback and comments on her own experience with Story Listening. They are truly beautiful!

What is your own experience?

This week’s story is a legend from the Native Americans, Cherokee. It is about the birth of strawberries.

As Tanya says: “follow the plot of the story, empathize with the characters, think the whole day about their behavior, actions or the end of the story…“