I am back from France where I got to eat delicious food and spend quality time with family!

As you already know, I was in the West of France, in a beautiful region called la Bretagne. Check out my Instagram account to see all the pictures. 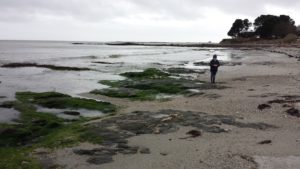 Most tourists know Côte-d’Azur, Dordogne, Provence, Paris, however this part of France is maybe less well-known and it is a shame because it is a pure gem! The part I want to talk to you about is le Morbihan which is South of Brittany.

Here are the 3 things I love about it:

Originally, I don’t come from this part of France and I didn’t know this beautiful region until my parents in law moved there. Since then we have been visiting them every summer and on other holidays, and I got to basically fall in love with it.

Le golfe du Morbihan is a very special place because it is a natural harbour on the coast sheltered from the Atlantic Ocean by the peninsula of Rhuys, but a small gap lets the water in and out. Legend says that there are as many îles, islands in the Gulf as there are days of the year. However, the gulf has about 40, depending on the tide. Many islands are private property, except the largest two, l’Île-aux-Moines & l’Île-d’Arz.

The sea is always present and always a surprise. For example, you are walking along a lane with fields until there it is: the sea!

The Bretons have a strong personality. Some Bretons wore their red hats, they are called les bonnets rouges, and they protested quite fiercely about eco road taxes or the closure of abattoirs… And they won!

They also have their own language, le Breton which is a Celtic language. They even have schools where children can learn French and Breton through language immersion. The first Diwan school was created by a few parents in 1977 near Brest, because the centralized French state schools were unwilling to offer the Breton language in the curriculum.

Morbihan is the only region in Bretagne which has a Breton name. It means “little sea” in Breton. I had the chance to discover this language when I went to Agen last summer. 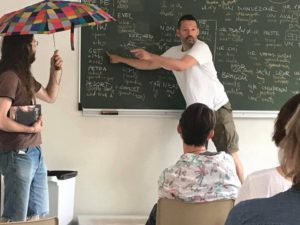 Daniel Dubois who is an incredible teacher of Breton and also French online, taught me a bit of comprehensible Breton. Contact him to have Skype lessons.

That is what I love about this region: its strong character rooted in history and traditions.

Of course, you cannot go to Bretagne, without having a crêpe ! I love crêpes & galettes, the two most iconic Breton dishes. The crêpes, are eaten for dessert and the galettes are usually salty and made with le blé noir, buckwheat.

One very special crêperie we go to very often is Le temps d’une Crêpe. Have a look at their page on Facebook, it has wonderful reviews and delightful pictures too!

I love hearing from you so let me know in the comments if you have been to Bretagne ? Do you LOVE crêpes & galettes too?

P.S. My Dear Man & I are working hard at the moment to bring you the best French resources online via stories and podcasts! So there will be ONE new video weekly every weekend from now one.