Quelle semaine ! What a week!

My lovely grade 12 IB Spanish learners passed their oral examinations on Thursday. Instead of going through long lists of vocabulary related to the topics they had to talk about, I have been doing Story Listening all along with them. So I have been giving them rich comprehensible input every lesson by telling them tales and folktales. What a surprise it was to have a natural conversation with them during the exam! Of course, they did some errors but they could maintain a ten minutes conversation with me, I was thrilled! 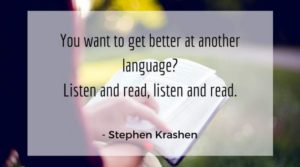 I also had the great opportunity to deliver a talk about the natural approach to a group of language learners coached by Alan Bigulov. It was the first time I was giving an online presentation about how I teach languages and what I believe in. I was so stressed out that my English was terrible! I experienced myself how important the affective filter is and how when you are nervous, your language skills do suffer!

When I explained how to acquire another language, I made the point that there is no need to spend tons of money in a language course or textbooks. All you need to do is to find input which interests you and which you can mostly understand. Your brain will do the rest. Mark Koopman, a language teacher in Japan, explained it very well I think: “Perhaps in the classroom of the future, teachers will not even be “input providers”. Perhaps they’ll be more like guides – helping students select and best utilize other sources of input.”

During the presentation, I also demoed Story Listening in French. A total beginner who didn’t know any French understood part of the story, yeah!

It was a very stressful week but I am grateful for what I experienced!

Le mois de mars, March in my family is filled with birthdays! My son turning 10 this year was a special one. We kept it low key though because the truth is I don’t really like to organize big birthday parties! So my son invited his best friends, they played football outside and then had pizzas. They had the best time!

I love hearing from you so let me know in the comments how you celebrate a birthday in your country.

P.P.S. Be sure to watch my last story from German author Heinrich Hoffmann about Kaspar à la soupe, a little boy who doesn’t want to eat his soup.