Bonne fête des rois ! Happy Three Kings Day! In France, on the 6th of January the Wise Men figurines in the nativity scene are placed around baby Jesus; in the lead up to this date, they were being gradually moved closer and closer to the stable. 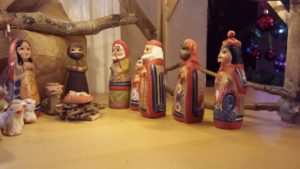 Les Rois Mages sont finalement arrivés à destination guidés par l’étoile, the Wise Men have finally arrived at their destination guided by the star. Listen to their story on my YouTube channel: 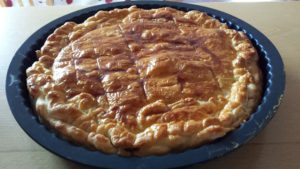 Traditionally, the youngest member of the family goes under the table to distribute the slices to the different people sitting around the table. The person who finds la fève, a porcelain or earthenware figurine in their slice of galette becomes the king (or queen) of the day and must choose his/her King or queen. This year, I was lucky to have my parents around the table. My mum got la fève so she became la reine, the queen and she chose my 5 years old son to be le roi, the king!

To make the galette as pictured above, I followed Julie Andrieu super easy yummy recipe:

More videos coming your way based on tales and legends! Brand New Season and video is on Tuesday 9th January!