Vous avez passez un bon week-end ? Did you have a good weekend?

Last Saturday 25th August, we celebrated my son’s saint, Saint Louis. It is the French practice of celebrating one’s “saint’s day”. Almost every day in the calendar has a saint’s name assigned to it, some have more than one (January 6 has five). When it is your “name day”, we will usually wish you ” Bonne fête “. It is not a big thing, but it is the custom to acknowledge it. Although, we should really celebrate your name day la veille, the day before the actual day as the Catholic tradition says.

In a previous newsletter, I told you how important it was for me to teach my children about French culture and history. I also wrote about the fact that a language is much more than words, it is a culture, a tradition, a history.

Saint Louis is a big part of French histoire. He became Roi de France, King of France, Louis IX at the age of 12 following the death of his father Louis VIII the Lion. However his mother, Blanche de Castille, Blanche of Castile, ruled the kingdom until he reached maturity.

Louis IX is a popular king because he lived in all simplicity in le château de Vincennes . He developed French royal justice, in which the king was the supreme judge to whom anyone could appeal to seek the amendment of a judgment. He banned trials by ordeal, tried to prevent the private wars that were plaguing the country and introduced the presumption of innocence in criminal procedure.

Saint Louis is often represented under un chêne, an oak tree where he would sit and listen to people who came to complain. He would always judge fairly.

Saint Louis also took an active part in  Crusades. He died from dysentery during his last crusade on a bed of ashes because he wanted to expiate his sins.

He built the beautiful Sainte-Chapelle in Paris and the small island on the River Seine is named after him, l’île Saint-Louis because he used to go there and pray.

(Re)watch my video about la chapelle Notre-Dame-de-la-côte where I tell you more about some saints and how to recognize them on paintings and sculptures:

Last week, I was delighted to see my learners reading French books and keeping at it. Some learners are reading authentic books and some others are reading graded readers, books aimed at French learners. This site is another goldmine to order graded French readers with adapted authentic texts.

Dr. Beniko Mason who developed Story Listening says about reading: “Story-Reading is introduced gradually and gently, using texts of high interest, so that students find the reading comprehensible and enjoyable. Our goal (as teachers) is to establish a pleasure reading habit, which will ensure continued progress in the language. In order to achieve this goal, we need to help students develop their language competence to the high intermediate or low advanced level, so they can understand at least some “authentic” aural and written input in the language afterwards.

Our aim is to help learners become autonomous acquirers of the language, so they can improve on their own.” 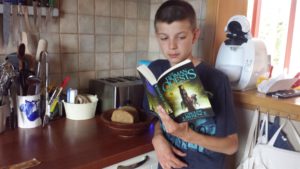 Louis reading whilst toasting bread for the family!

This is exactly what I intend to do with my learners!