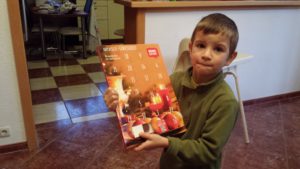 Get yourself into Christmas à la française ! J’ai une surprise, I have surprise !!! 25 Christmassy videos are waiting for you to acquire all the vocabulary and expressions about Noël en France ! Watch a video each day (they only last between 1 and 5 minutes each) and get into the Christmas spirit!

Here is the first one which is part on my new YouTube playlist Noël en préparation:

This week’s video is very much de saison, seasonal because it is starting to snow everywhere in France, even in Paris! It is another Polo’s adventure. It is also a special story for my four year’s old niece who loves Polo’s stories.

My niece lives in London, her father is English and her mother who happens to be my sister is French, so she is a bilingual kid. Although my sister speaks to her only in French, she is more confident in English.

Two months ago, my niece started to watch my videos. She listened to my stories nearly everyday and my sister says it has made a massive difference. She says my niece “is now starting to make sentences in French, not just using spare words. She specifically uses vocabulary from those videos like ‘étoile de mer’.” My mother also noticed the difference when they meet via Skype. In the past, my niece would sometimes answer her in French, sometimes in English. She now only speaks to her in French! As I keep repeating input is crucial!

So here is Polo under the snow. You will acquire:
Il fait froid = it is cold
Il neige = it snows
Il met = he puts on
Faire un bonhomme de neige = to do a snowman
Tout à coup = suddenly