L’automne, fall is now around the corner and this quote by French author Albert Camus is à propos, n’est-ce pas ? 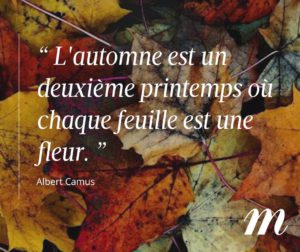 Fall is a second spring when each leave is a flower.

I have never been happier helping people to acquire another language. This is because I do not feel I am a teacher anymore. I feel I am a “language mum”!

I already wrote about being a language parent but it strikes me how I am not a teacher anymore.

Stephen Krashen has published a new article recently entitled “Language Parents for Second Language Acquisition“. In this short and thoughtful article, Krashen mentions his own experience with “his “parent” in Vienna in 1961-1962 (his landlady, the wonderful Frau Novak) told the same stories again and again, but they were great stories and he understood more each time he heard them, a familiar occurrence with narrow listening (Rodrigo and Krashen, 1996; Dupuy, 1999).”

Krashen’s definition of “a “language parent,” like an actual parent, is somebody who will engage you in conversation in the language you are acquiring but who will not try to be your teacher, will try to understand what you say “even though you are miles away from what a native speaker would usually be able to understand”, is interested in you as a person, and “more often than not, the person will be quite talkative”. In other words, a language parent is someone who will give you comprehensible input.”

My French sessions (I don’t call them lessons anymore) follow those 2 simple steps:

Now as any maman française, I do make mistakes sometimes when I speak or write in French. Who doesn’t do any mistakes? 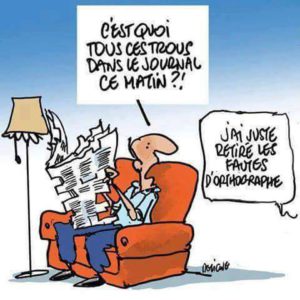 “What are all those holes in the newspaper this morning?”, “I just removed all the spelling mistakes”

One common mistake the French do when they speak is to omit the ” ne ” in a negative sentence. For example, instead of saying ” Je ne veux pas aller au cinéma ce soir. “, they say ” Je veux pas aller au cinéma ce soir.” Some argue it is not a mistake anymore because so many people drop the ” ne ” in informal conversations. It was actually part of an interesting discussion with one of my dearest learners and on a Facebook group for French teachers I follow.

My actual point is that although I consider it une faute de français, it is not that important. Of course I want my French learners to speak French correctly but  I don’t address it.

“A language cannot be taught” so I don’t “teach it”. I am a “language parent”. I give input to my learners and subconsciously they will acquire the language I speak to them (with or without the ” ne “).  However when they go to France, they might be corrected by quelqu’un qui n’aime pas qu’on écorche la langue française, someone who doesn’t like French to be mangled!

In my new season #4 video I did make another common mistake! Did you spot it? Instead of saying sit down ” assieds-toi ” or ” assois-toi ” (quite difficult to pronounce), I said ” assis-toi “. This is a very common misuse of the verb s’asseoir, to sit.