Culture is intrinsically tied to a language. That is why my motto is a Czech proverb “Learn a new language and get a new soul“.

According to Benjamin Lee Whorf and his theory of linguistic relativity, “language shapes the way we think, and determines what we think about.” And Holy Roman Emperor Charles V who spoke 6 languages fluently, said the following, “I speak Italian to ambassadors, French to women, German to soldiers, English to my horse and Spanish to God. A man is as many times a man, as many languages he knows.” Read this fascinating article about how languages shape the way we think to understand the connection between culture and words.

So today I want to share with you two cultural aspects of my latest story.

My new story is about Pierre who wants to have his hair cut, il veut se faire couper les cheveux.

If you happen to go to the hairdresser, le coiffeur in France, you may want to know a few words and expressions to explain how you want your hair to be! So here is a quick summary of all sorts of hairdos and haircuts, coiffures et coupes de cheveux in French. Isn’t that cool? C’est cool, n’est-ce pas ? 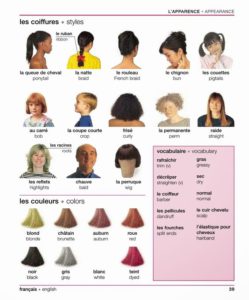 And by the way, you say aller chez le coiffeur, to go to the hairdesser. The preposition chez is a high frequency word which means “at” in English. Have a look at my one minute video to know when to use chez.

France is such a beautiful country with a diverse landscape! I am not saying this because I am an arrogant Parisian! I am saying because it is true. In France, you can go by the sea, à la mer, you can also go to the lovely countryside, à la campagne and you can go to the mountains, à la montagne. Perfect! Parfait !

I already mentioned Le Massif Central in a previous newsletter and today, I want you to discover Les Pyrénées, dear to my heart! It is the mountain range separating France from Spain, l’Espagne and it is truly superb, superbe !

Have a look to my other one minute video about the noun la montagne which is a cognate.

Be aware of the brown bears, ours bruns. They had disappeared but they were reintroduced in the 90’s. A couple of bears from Slovenia were introduced in the French Pyrenees. Now twenty years later, they have had babies and there are around 39 brown bears! The farmers are not happy because they kill many sheep. Read several comprehensible articles about this issue in Un jour une actu, One day one news which is a French newspaper for children.

And here is the story about haircut and a brown bear! It is inspired by Annual Hair Cut Day by Noni.

In the comments below, let me know whether you have long or short hair? Est-ce que tu as les cheveux longs ou les cheveux courts ?

2 thoughts on “French the natural way: two cultural aspects of a story”