My Dad shared with me this interesting article about Tomi Mester, who is a data analyst and researcher who wants to learn Swedish because he moved to Sweden six months ago. I thought this article was interesting because Tomi mentions that he watched two popular TV shows in Swedish with Swedish subtitles. He wrote it was “a pretty unorthodox method” but to me it is the natural method, the input hypothesis developed by Stephen Krashen. Tomi Mester explains he chose two series he had already watched in English before and which he liked. Basically, Tomi chose to listen to comprehensible and compelling input which is the best way to acquire another language. 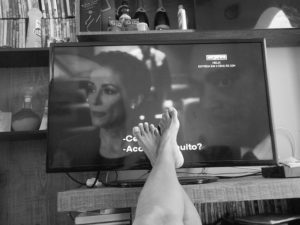 Therefore there are more or less 1000 (I believe there are even less words!) unique top words you should acquire when learning another language. These words are called high frequency words because they are used in all conversations. That is why I always introduce those words first when having sessions with my language learners.

I must say I was not a big fan of French series. I thought American and British series were far better done, however some recent French series are excellent.

It is my latest addiction and a political thriller based upon real accounts by former spies and inspired by contemporary events, and the daily life and missions of agents within France’s Directorate-General for External Security, its principal external security service. It focuses on the “Bureau of Legends”, responsible for training and handling deep-cover agents (operating ‘under legend’) on long-term missions in areas with French interests, especially in North Africa and the Middle East. Living under false identities for years, these agents’ missions are to identify and recruit good intelligence sources. You might recognize Mathieu Kassovitz, best know for his role Nino Quincampoix in film Amélie (Le Fabuleux Destin d’Amélie Poulain).

It is a completely different genre but it is a good laugh! You will get an insight into the lives and relationship of a French couple, starring young Jean Dujardin who later won the Academy Award for Best Actor in his performance in the silent movie The Artist.

One of France’s most popular television series and originally from Quebec, the French adaptation has shortened the episode lengths down to seven minutes each. Ideal to fit in your busy schedule!

Another good laugh and a great insight into the French culture and mentality. I already mentioned it in my previous newsletter about la rentrée, back to school but it is worthwhile mentioning it again. Est-ce que tu l’as vu ? Have you seen it?

I always love hearing from you! Are there any other French series you would recommend? Leave your recommendations in the comments below.

While it is enjoyable and productive to watch TV series, the truth is that you don’t always have time to sit down to watch a 30 to 50 minutes episode so best is to keep watching my videos !

My latest story is about un accident. You will acquire:
Il est très fatigué = he is very tired
Vous êtes blessée = you are injured
Vous voulez vous asseoir = you want to sit down
Il donne = he gives
Elle remplit le formulaire = she fills in the form
Elle emmène = she takes